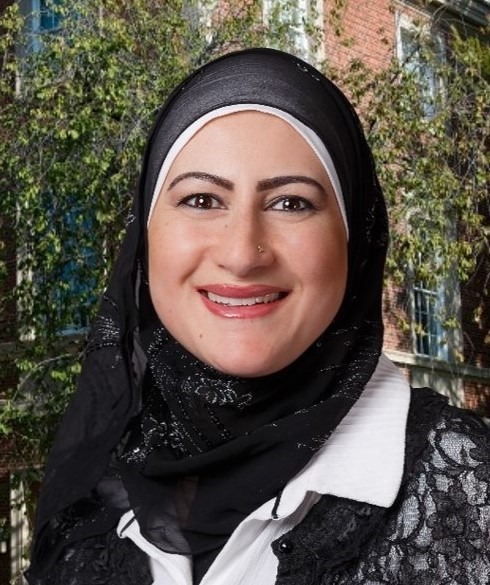 Back to our Team

Roula is an Arabic-English Certified Translator and associate interpreter in Arabic. She holds a doctoral degree in English Literature and a certificate in  has more than 20 years of experience in the industry. Roula is the president of the Association of Translators and Interpreters of Alberta, and also part of the Canadian General Standards Board for Translation Services. Her experience is the cornerstone of WWB’s training, editing and cultural brokerage components of our company. Working for our offices of Edmonton and Calgary, Roula’s goal is for WWB to become a leading North American and company in language and communication services.

Roula Salam is an Arabic-English Certified Translator, and president of the Association of Translators and Interpreters of Alberta. Roula holds a degree in English Literature from Queen’s University, a certificate in education, and has more than twenty years of experience in teaching, research, and writing, and over 15 years’ experience in translation.

Roula left her native Lebanon for Canada in 2005 as a doctoral student and single mother. Her experience in translation had commenced in Lebanon, where she embarked on that path of her career by translating children’s books and commercial documents. Between 1994 and 2005 in Lebanon, she worked in the fields of journalism, editing, and teaching, alongside translation, while she pursued her undergraduate and graduate degrees.

In Canada, her doctoral specialization focused on postcolonial studies, and her dissertation, entitled “Hope in the Most Unlikely Spaces: Thawra and the Contemporary Arabic Novel” (September 2011), focused on manifestations of rebellion (or  in Arabic) and socio-political transformation as expressed in various literary works from the postcolonial Arab-African world. This was written at a critical time when the Arab Spring was just beginning to take the world by storm.  As such, Roula conducted extensive valuable research and comparative studies between English translations of Arabic literary texts as part of her doctoral research.

Her doctoral research re-ignited her passion for translation and interpretation here in Canada. In 2006-2007, Roula worked as a Court Interpreter in Kingston, Ontario, before moving to Edmonton in 2007. In Edmonton, she first worked as a translator for a year and a half at the Department of Anthropology, University of Alberta, and then worked as an interpreter for the Faculty of Nursing between 2013-2015. She became a member with ATIA in and gradually began establishing her business and reputation as a translator. To date, she has translated a great number of literary, academic, educational , and official documents for individual clients, companies, and educational and government institutions.

Roula teaches English at the University of Alberta, has been a member of the Canadian Armed Forces, and resides in Edmonton, Alberta with her husband and two girls.

This website uses cookies to improve your experience while you navigate through the website. Out of these, the cookies that are categorized as necessary are stored on your browser as they are essential for the working of basic functionalities of the website. We also use third-party cookies that help us analyze and understand how you use this website. These cookies will be stored in your browser only with your consent. You also have the option to opt-out of these cookies. But opting out of some of these cookies may affect your browsing experience.
Necessary Always Enabled
Necessary cookies are absolutely essential for the website to function properly. This category only includes cookies that ensures basic functionalities and security features of the website. These cookies do not store any personal information.
Non-necessary
Any cookies that may not be particularly necessary for the website to function and is used specifically to collect user personal data via analytics, ads, other embedded contents are termed as non-necessary cookies. It is mandatory to procure user consent prior to running these cookies on your website.
SAVE & ACCEPT
Contact Us